It was all a bit surreal. The weather was calm, it was a normal evening. Within 20 seconds the trees were shaking like they were about snap…. and then a sudden huge gust came through and ‘crack crack crack’ they dropped like flies.

I had that “Tsunami 2” feeling but luckily was for only a few seconds, the wind dying down and within 20 mins the sun was out again like nothing had happened.

It could have been a lot worse. No one hurt and no big trees crashed into the houses. Many roofs off, many trees down just when they were about to produce this year’s much-needed crop of fruit that we have been denied for some years now.

Anyway, life goes on and they say the power will be back on soon. And every story has a silver lining, literally. See the last pic in the set 🙂 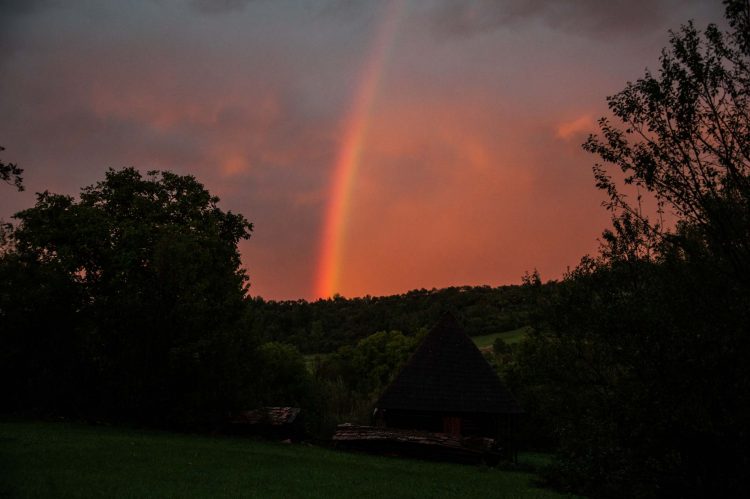 As I arrived down at the hotel to see the damage, the winds were waving goodbye with a nice rainbow. 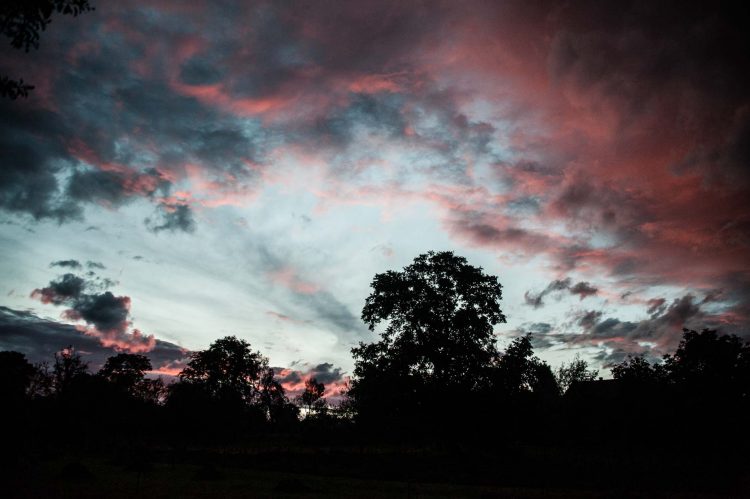 The colours in the sky where amazing. 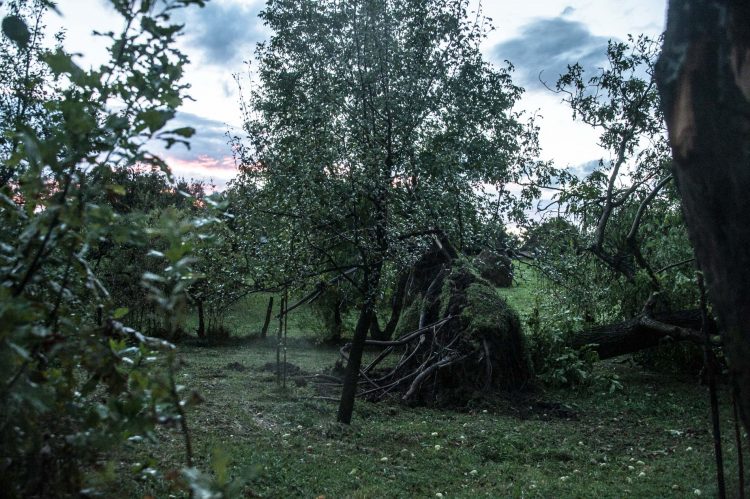 We then started to see the damage that is everywhere in the village of Breb. 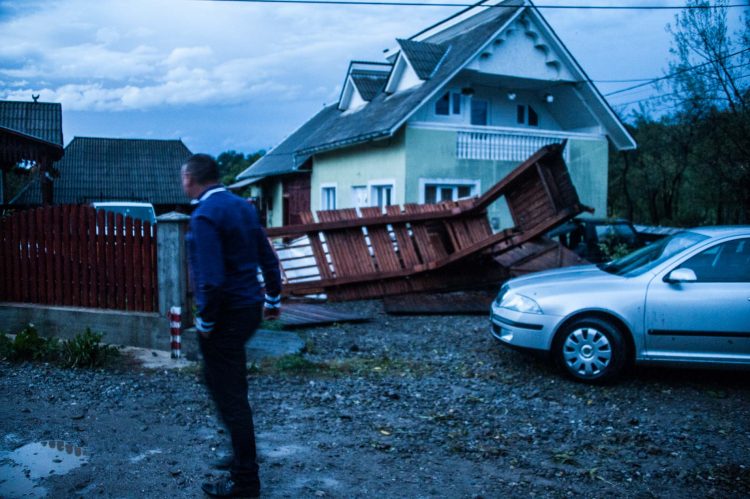 On taking guests to dinner we called ahead to see if she was OK to still serve. She said she was fine and didn’t mention it might be a bit tricky to get into the house now the gate was down. 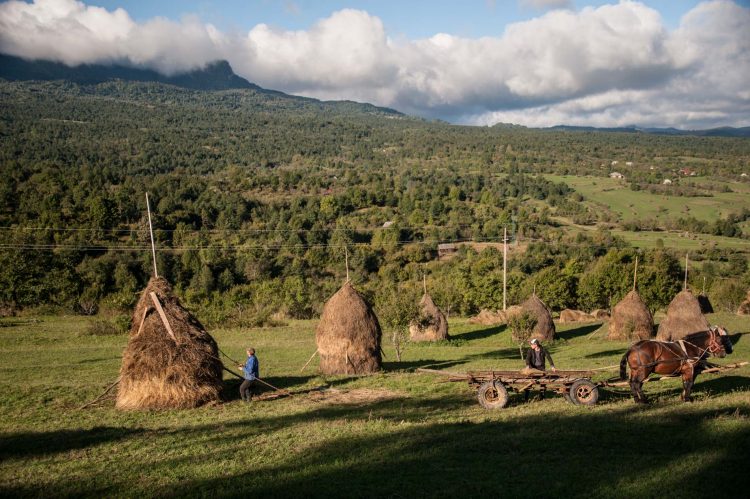 Next morning amazingly most haystacks were in tack. This one getting some help to be straight again.

Maybe 10 – 15 trees are down around the hotel. This will become a table stand one feels. 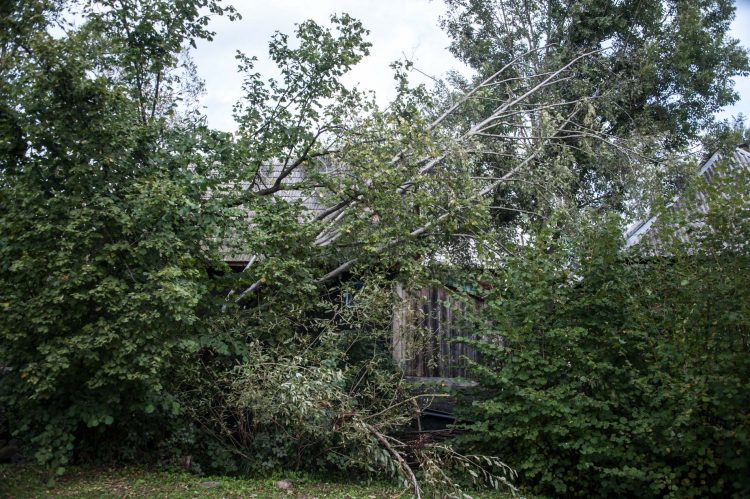 This huge tree missed the house, we had guests inside at the time. It was close for sure. 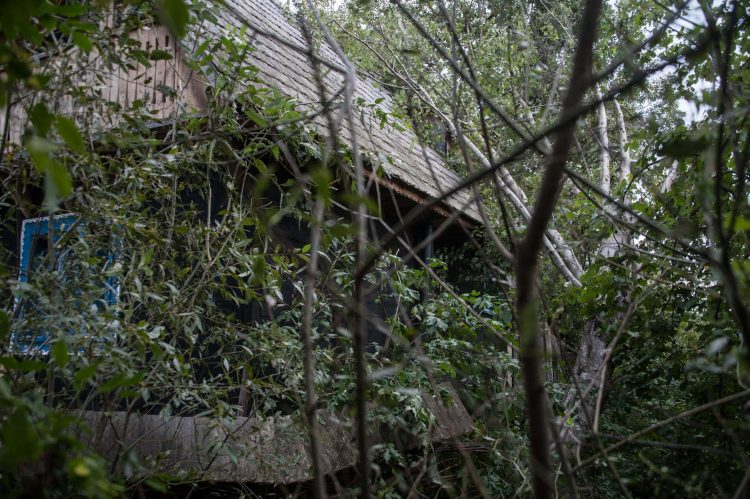 We just need to make sure it does not bring the roof down with it when we start with the chain saws. 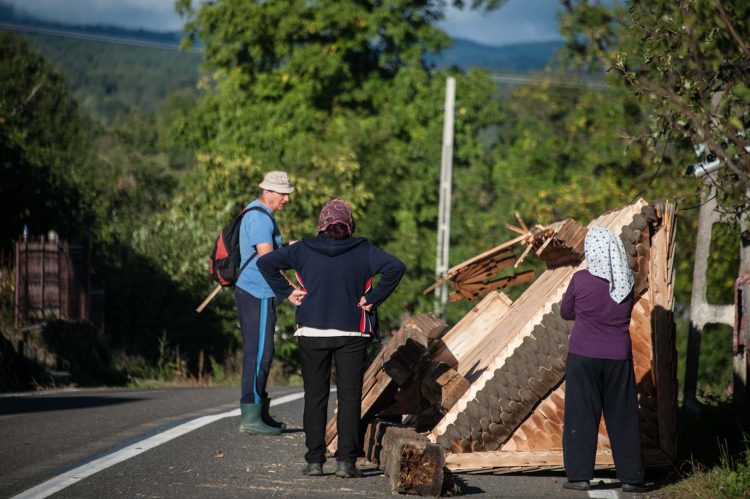 You can image the conversation ” So, how did your gate cross the road on its own then?” 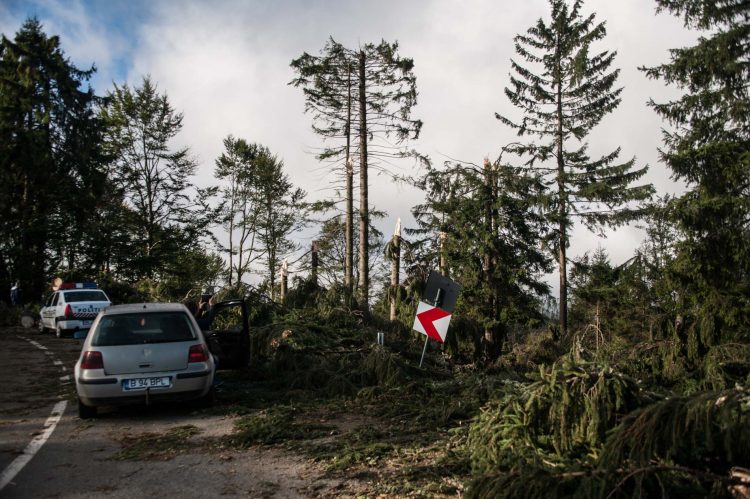 Even the police had stopped to take some pics. 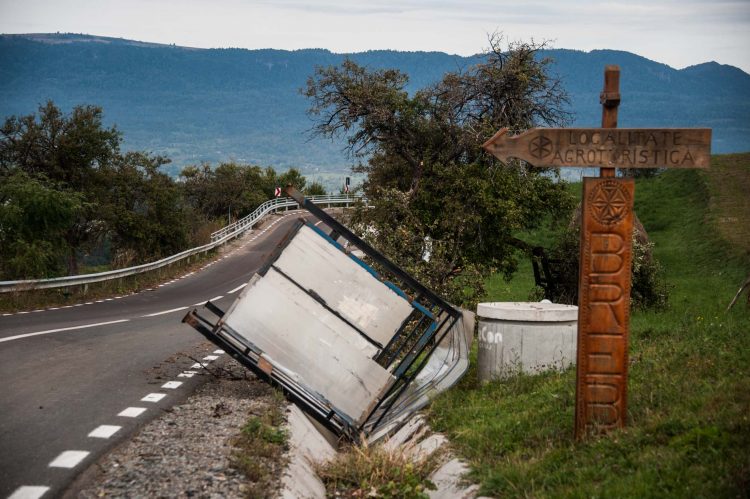 The bus stop got drunk and fell over a few weeks ago. This time it got so pissed, it managed to cross the road and fall head first into the ditch! 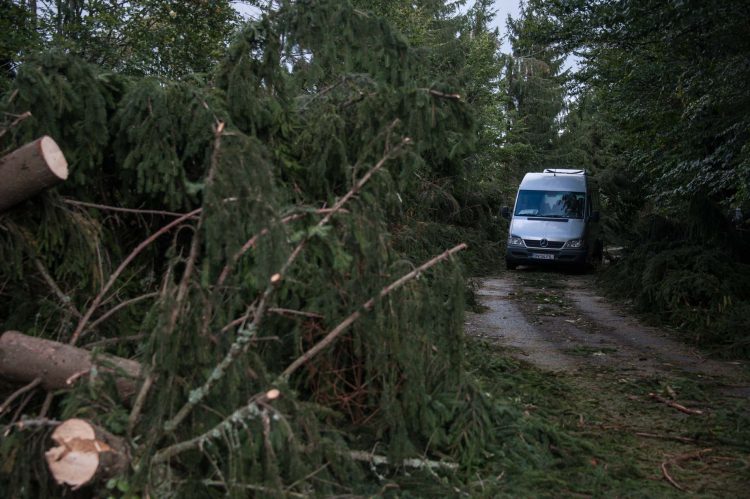 It was almost like a tunnel of trees in some places. 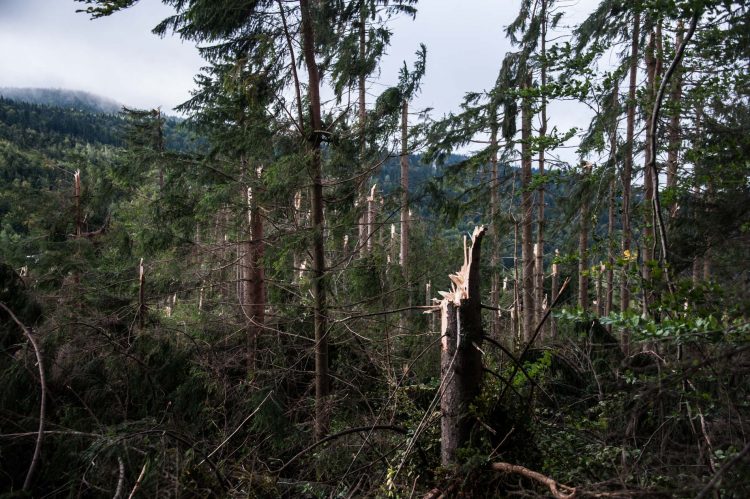 Mass deforestation by Mother Nature herself. 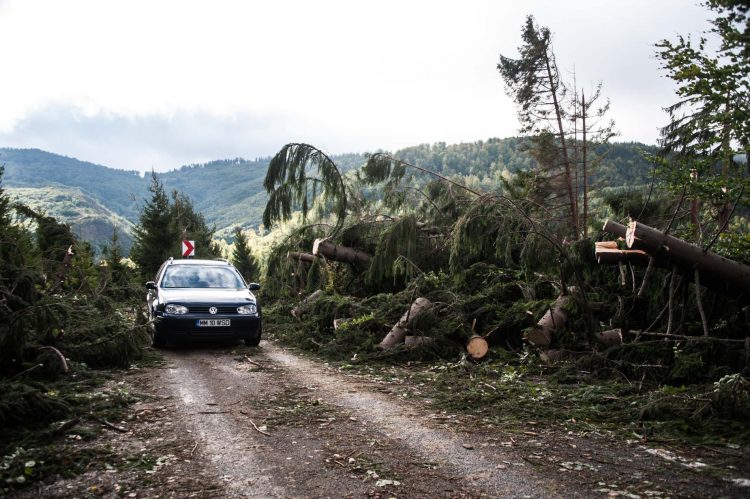 The trees were down for miles and miles. 100s of pines lost to the winds. 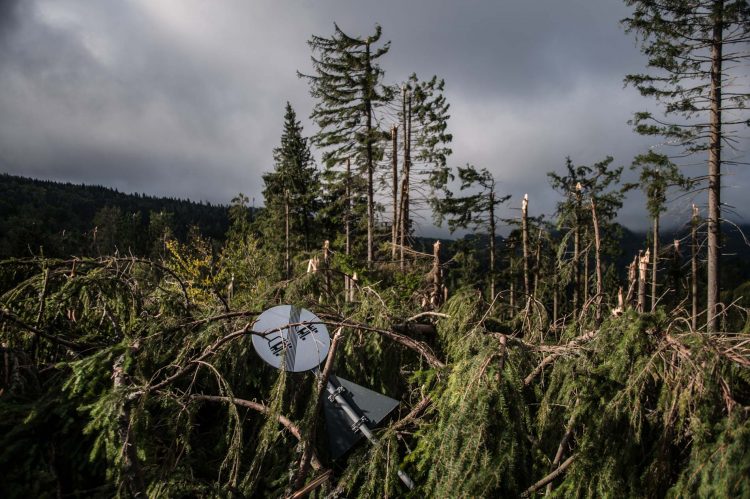 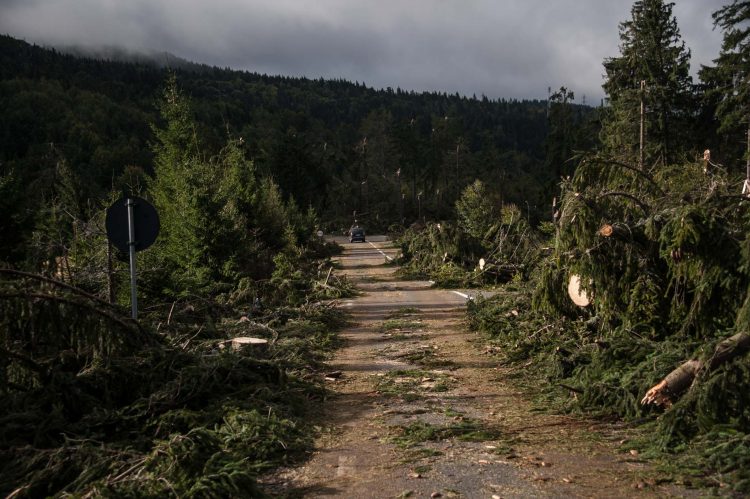 It was like someone had dressed the road for Christmas day. 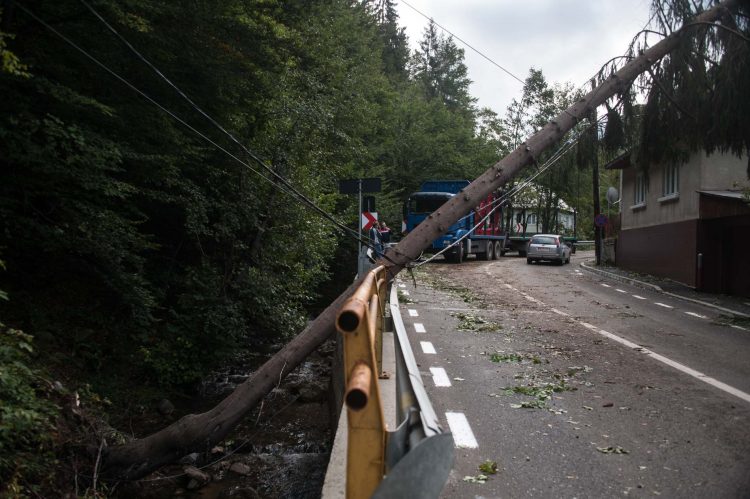 Trucks were blocked from getting through in Cavnic. “Ce su faci” 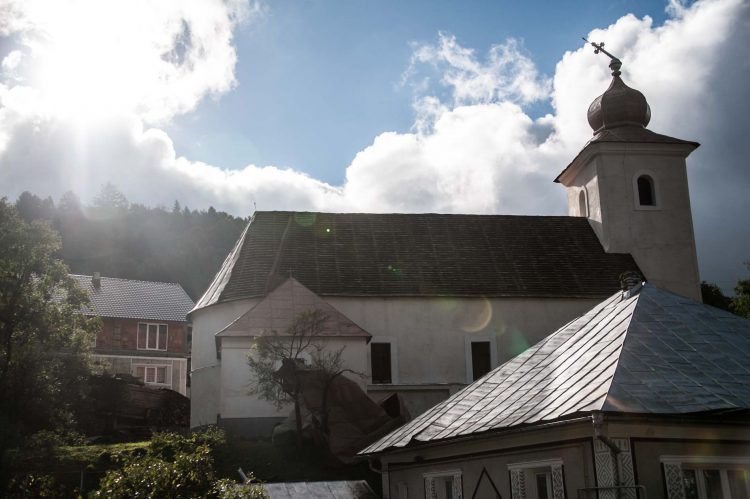 As you can see on the ground the church roof was ripped clean off, the cross putting up a fight no dought in the moment. 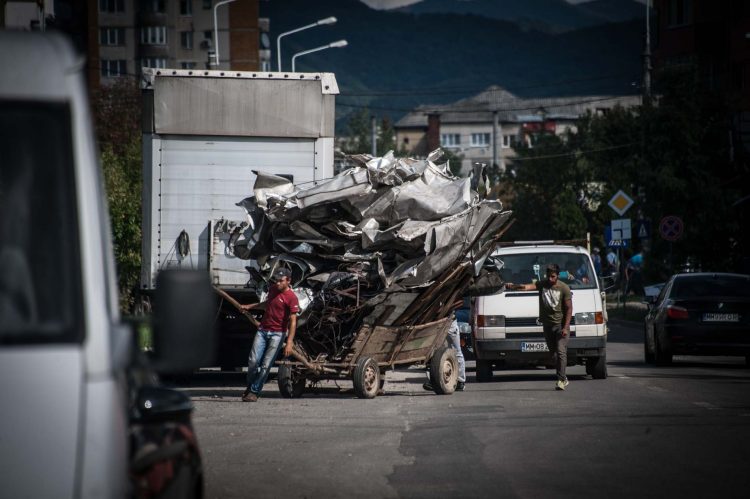 Well, it was good to see, at the end of the day – someone was having a good day 🙂

The Village Hotel is very much open, even if dinner is by candle lights so hopefully see you all soon.